It’s been a while since my last interview with a talented independent singer-songwriter and music producer here on Jabberdi. However, I hope you agree the wait was worthwhile. I would like to introduce you to Dan Heroy, Lead singer, songwriter, and producer for St. Theodore. 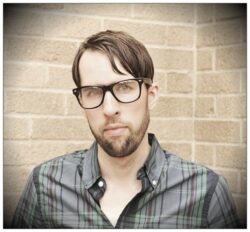 If it’s the inspiration, you are looking for, then Dan Heroy should be all the inspiration anyone needs to excel in the music industry. Dan is self-educated in the art of producing awesome soundtracks, Writing catchy meaningful song lyrics created for his latest projects “I Swear” and “Lovesick 101”

His debut album “Sounds Of A Burning Heart” released back in 2013 meets with fans and reviewer’s approvals and is still making waves in 2015.

Dan’s only formal education in the music industry was a few guitar lessons, everything else about Dan’s background in music comes from his passion to self-educate and succeed in what he loves to do.

I’m pretty sure readers would love to know some background info on how and when you got started in the music industry. So Let’s start with finding out more about you and your music.

“You have an awesome sound going on with your music Dan… I’m a great fan of synthesizers. And your new single “I Swear” is an example of what can be done with electronic synthesizers, awesome drum beats and accompanying lyrics. Do you have any formal education in music, or are you a self-educated in music production, how did you get started?

Thanks for the kind words. I would describe myself as self-educated in music and music production but that needs to be qualified a bit. I have been involved in music and actively pursuing a career in the music industry since I was about 14 or 15 years old, back in 1998 or 99.

Back then I took guitar lessons for a bit. That is the extent of my “formal” training. I was in an Indie-Rock band from 1999 until about 2005, playing guitar. Did some touring and recorded and self-produced albums with the band.

Around 2007 and 2008 I really wanted to dive into a solo project. That’s when I bought Pro Tools and an audio interface and started teaching myself about recording and production, and it’s an education that continues to this day.

I have learned a lot since then from amazing people within the music industry as well as from books and YouTube videos. Youtube is great! I am on there often to learn a tip or trick about recording and producing.

“What part of the industry inspires you the most… producing music, writing lyrics or getting up on stage and performing, what’s the biggest driving force behind your career in the music industry?

I like all the aspects of the music industry. There is such a difference between the rush and challenge of being on stage and performing and playing off of the crowd, and then the very detailed and disciplined task of writing a song and spending the appropriate time bringing the song all the way through the production process.

For the past several years, I have really been enjoying producing my music. I have self-produced my St. Theodore project, and I am starting to produce for other projects now.

I love learning about music production. I can’t get enough of it when I started with my St. Theodore project. I didn’t know a whole lot about doing music like this. The journey to create this project and now branch out into other projects with that knowledge has been a great experience for me.

“Around about now I should be asking you; who inspires you the most, but I’d like to put a little twist on that question? If you had the chance to produce a soundtrack and write the lyrics for a chart-topping artist this year. Who would that be and why?

Great question! If I was to answer the “who inspires me the most” question I might also be able to say I would want to work with them in that capacity. My biggest inspiration when I started St. Theodore was Owl City.

There was something unique and captivating about his sound and style that gave me just the right amount of direction and inspiration when I was looking for it. Owl City would be great to work with because of that and the similarities between our projects I think would lend itself well to collaborating on a project.

So I am hopeful of that happening someday in some context. However, to answer your question more specifically, and it’s a question I have tossed around in my head in some daydream sequence or another, I would love to produce for Ellie Goulding.

She is incredibly talented and seems to keep getting better with every release. It would be an awesome challenge to be able to write and produce for someone who has that much momentum and try to reach the next level.

I almost said, Rihanna, just because everything she does turns into gold. That’s a bit of a different style than I would normally do but her stuff is amazing. I wouldn’t turn down a chance to write and produce for Lady Gaga either. I think that would actually be a great fit for my writing and production-wise. I could keep going, but I won’t!

“Your debut album “Sounds Of A Burning Heart” was released back in 2013. 1- how was the album received by fans and music review sites? 2- what did you learn from the process of releasing your debut album, and is there anything you would do differently for your next album release in the future?

The music has been received really well by fans. I am appreciative of the response it has gotten. Even a year and a half after its release those songs are still getting a lot of streams, downloads, and interaction online.

It was kind of a unique release for me in a way though. I touched on some of the background already. However, that album, for me, was more about the process and the journey than it was about the final product.

It was my first album with St. Theodore, and I was learning so much along the way and developing my sound with every single song. Once I finished the album, there seemed to be a lot of diversity and growth in the production.

Some songs came out of it that I was really happy with, and people seem to like a lot of those tunes. After it was released, I mostly left it up to the public to take it and run with it more than actively promoting it in a typical fashion.

The biggest way that album continues to spread and get talked about is through YouTube. So many people have asked for permission to post those songs in their videos, which I always say yes to, by the way, as long as proper credit and links to St. Theodore are given.

“Looking forward to the future, what plans do you have to release your next album. Is there a new album project being worked on right now, If so what can your fans and reviewers expect this time around?

After my Sound Of A Burning Heart album, I wanted to release new singles for a while before the next album, which I have been doing. I released I Swear and Lovesick 101 in 2014.

And I have several more singles almost finished and ready to go. All these singles I think are my best work so far. However, that’s for the public to judge I guess.

I also have been releasing lyric videos to a few tunes. Hopefully, each single will have its own video to complement it. My biggest project to date, which will be released very soon, is the newly mixed and master single version of my song Gonna Get Better along with a music video for it.

Gonna Get Better has been my most popular song to date, it was on the …Burning Heart record. I updated it and filmed a music video for it. Both will be released as soon as possible.

“I see you have started a Vlog on YouTube “St. Theo Vlog – The Sounds Of St. Theodore” Have you any plans to teach music production; I believe you use “Reason” among other types of Home Studio Music Production Software. Teaching your skills to others could be a great way to fund future projects you have planned.

I would love to teach or collaborate with other musicians out there. One way I am starting to do that is through my new Vlog like you mentioned, The St. Theo Vlog on my YouTube channel.

I am hoping that will be helpful and interesting to my fans and people that find me. Something else I did recently was to build my own personal website and social sites for myself as a musician and producer.

I just launched www.danheroy.com so that people can connect with me as a producer, and I will be able to collaborate and work with people through that source. I am really excited about doing more of that and would encourage anyone reading this to reach out to me through that site if you are at all interested. I’d love to talk about your project.

“Do you have any message to inspire others who want to enter the music industry reading this interview? Or a message you want to give to your fans and future fans out there?

Sometimes we can get so caught up in future things or what is not happening with our songs and projects that we miss the beauty of creativity, learning, and enjoying the things that are happening.

You won’t achieve what you want to achieve without putting in the proper time and dedication, that is true for music or anything in life really. Focus on today so that you are ready for tomorrow when you get there.

Also, there is an old adage in the entertainment business that I think is helpful and true… “It’s better to be two years late, than 10 minutes early.” Develop your craft as much as you can so that when you do take it public, you are more than ready to succeed.