The purpose of this guitar helper article is to teach you, the basics on, how to play the acoustic guitar for beginners. 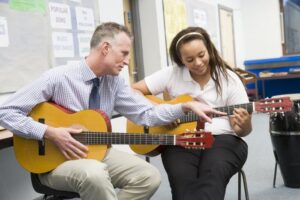 I shall take you through the G, C, and D chords of the guitar and how to place a basic strumming pattern with each chord. Assuming a good number of the interested party consists of beginners, it’s, therefore, reasonable to start with the basics!

How to hold an acoustic guitar:

Normally there are three basic options a person can choose to hold his or her acoustic guitar. It’s up to the players to experiment and determine which way fits them best. They are;

a) The Casual method,

b) The Classical method, and

I. The Casual method:

This method is the most common of all the three. Here, you place the guitar over your right leg and then pull the guitar close to your body. Then your right hand should support it in such a manner, not to slip downward and also to hold it close to you.

It would also be advisable to use the straps in an aim to keep it close to you and enhance stability. After you’ve executed that part successfully, it’s time to bring your left hand on board. Bring it up and place it on the neck of the acoustic. Now you good to go but ensure your both arms are relaxed and that you sitting comfortably and straight.

This method calls on for a foot stool which is very affordable. With only fifteen dollars, you can have one. Now place your left foot on your foot stool and place the guitar over that same leg. Hold the guitar to place by placing your right arm over it and bring the left arm up to its neck.

One beneficial thing a keen eye will quickly notice is that the acoustic tend to stick out farther to the left using this method than it did when using the casual method. This allows the player of the guitar, a much better access to the entire frets. Because of this, the method best suits those situations calling for playing more difficult things appearing higher up on the guitar’s neck.

This method is better suited and is more commonly utilized for situations where the guitar is played in front of people to enhance and maintain consistency. However, here it’s not a matter of choice anymore, one has to wear straps. Their cost range is between five to thirty-five dollars.

The options are either to have straps that you can tie to the headstock of your guitar or acquire acoustic guitar that contains strap buttons. The best thing is that most straps are made in such a way one can adjust to have the acoustic guitar at either a low or high position.

Both the two position are good and are at the player’s disposal. This’s because, playing the guitar in low position proves to be cool and more comfortable for the player, however, playing it in high position gives him/her a better access to the neck of the acoustic guitar keeping it in a better overall position for playing. To make playing and practicing of your guitar more consistent, it’s recommendable to adjust the strap to an exact position your guitar would be if you were sitting.

Whether it’s sitting or standing, do it straight and in a relaxed position. Now, when placing your finger on a fret of the acoustic guitar, it’s vital to recall placing it very close to that fret. On the issues concerning the chord shapes, do not worry yourself so much about perfecting the sound of the chords right away.

At this level, focusing on how to get the shapes down is just fine, since your left hand’s strength will arrive after some practice. Curving your fingers enough so that you play with the tips of your fingers should be something you aim reluctantly. Such a practice assists the fingers at work to maintain position and avoid muting the surrounding strings. Acoustic Guitar Video Lessons

It’s wise and highly recommendable to practice all the above-mentioned chords till the shapes memorized are achieved, then try deviating from shape to shape. It’s quite normal for your fingers to get tired and sore at that time, so don’t get frustrated. Also, if you feel like you need time to get the shapes down, take some days off to practice and then return to this page to continue with the strumming pattern with the chords.

Strumming Pattern with the chords:

Let’s now give the chords we have learned, a meaning by placing simple strumming pattern with them. The entire down strokes will be utilized for the strumming pattern. Perform your G Chord and make your pick ready in your right arm. The G chord must be strummed four times. Sift to your C chord and strum it four times. You’ll finish your pattern by performing your D chord and it must also be strummed down four times.

Shifting in between chords smoothly is no laughing matter and could prove to be the hardest part of performing something of this nature. It is, therefore, necessary to perform your strumming as even as possible, especially when switching your chords. It can also prove a smart move to take the strumming as slow as you require at first. There’s no need to rush in order to play fast, focusing on playing evenly and clean is the key thing here!

Understanding these chords plus few other basic guitar strumming patterns can allow you to perform a couple more songs than you anticipate. Lots of songs you listen to on the radio are just but a few chords combined with some basic strumming. You can put it to test by trying to generate your own strumming patterns through experimenting and mixing the chords you have just learned in this lesson.

More Articles to Learn How to Play Guitar

What’s The Best Type of Guitar to Learn On is it Acoustic Electric Or Classical Guitar?