One of our predictions on Our Top 5 Up and Coming Female Youtube Groups and Solo Artists in 2012 was Tiffany Alvord and what a wonderful end to 2012, it was for her. 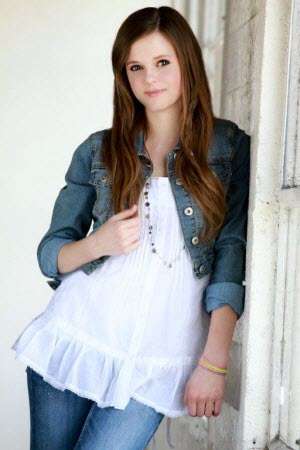 It does not seem so long ago she uploaded her first ever video to Youtube at age of 15; she recorded in her bedroom with the help of her brother; since then she as never looked back.

In 2012, Tiffany won the chance to give a live show in front of a 2 million-strong crowd in Times Square, New York to bring in the new year.

Tiffany Alvord won the NIVEA’s first-ever contest “Through a partnership with Sony/ATVs We Are The Hits YouTube network” and managed to come out on top to win the contest outright for her rendition cover of Carly Rae Jepsen’s “This Kiss” and also got to meet Carly Rae in New York.

It seems she is a girl to be taken very seriously when it comes to entering and winning talent contests. It’s not so long in the past she entered and won $25,000 in a competition run by artistsignal.com and was smart to reinvest her winnings back into her music career.

Tiffany Alvord joined the Youtube community on April 14th just a little under four years ago and has worked extremely hard at becoming a popular youtube Starlet along with continually touring what seems most of the USA performing and promoting herself.

She has also performed in Changsha, China on the “Day Day Up” TV show with other youtube stars and starlets such as Jason Chen and Megan Nicole, in addition, she got to do a live show in Shanghai with them back in December 2011.

In May of 2012, she performed at the first ever YouTube sponsored YouTube Stars Concert in Singapore at the Hard Rock Coliseum, Resorts World, Sentosa on May 5th, 2012, along with David Choi, Jason Chen, Joseph Vincent, Anna Free, and CLO.

Tiffany also as a busy schedule ahead of her in 2013 – In January and February of 2013 she starts touring again, and fans will see her touring with Allstar Weekend on their 2013 US Tour. Then it’s on to Singapore and Malaysia to do a live show for her fans over there.

Youtube Stats for Tiffany Alvord are impressive, to say the least, and continue to grow rapidly as her worldwide fan base grows. With: 1,174,957 subscribers and 270,218,098 video views at the time of writing, I guess you can safely say she’s arrived and here to stay.

Posted her first video on YouTube in April of 2008 when she was 15 years old.

Posted over 145 videos in the last four years.

Love’s movie nights with my friends.

Writing songs since she was 10-years old.

Taken piano lessons; when she was in elementary school.

She taught herself to play the guitar.

Owns three guitars. Her newest guitar is a 2010 Limited Edition Taylor Performance Guitar; Second is an Ibanez a200e, and the third is an Ibanez ac30nt.

The first guitar ever owned was a pink Daisy Rock guitar.

Her first (fan-funded) album of original songs, “My Dream,” was released in December of 2011.

Her second album, “My Heart Is” was released on September 18th, 2012. And went to #1 in the singer/songwriter genre on Itunes the day it was released.

All songs on both of Tiffany Alvord’s albums are original songs written and performed by Tiffany.

Loves life and feels very blessed with her success so far.

Tiffany’s fans are everything to her; she feels her fans are the best fans in the world. And she love’s all her #TIFFANATICS that support her.